After finally finding warmth, we drove back to the cold in Yosemite. Turns out, it was warm here until recently. Only when we show up do they have a huge snow storm. I think we might be affecting the weather some how. 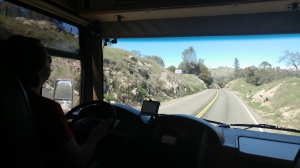 During our drive, we experienced a first for us! When we stopped for lunch, we parked on a small road that had access to an exit. Unfortunately, by the time we were ready to leave, other trucks had shown up, complicating our exit. There was a small gap, so we tried to navigate through it and got stuck. In order to get out, Damon had to block the exit to the restaurant, unhook the car, and move the RV out. Apparently, this is common for class-a’s with tow vehicles.

We arrived at our campsite just in time for the rain. Not feeling particularly adventurous at this point, we settled in for the night

After some rough sleep, we decided to get out and get the boys some fun. First stop, the Children’s Museum of Sierra.

This place is amazing! Four large rooms fill to the brim with toys and activities that the kids could play with. Both boys had a great time – so great that Damon was able to sneak out and get some car stuff done. Now we can finally get the car registered.

The rest of our very wet afternoon took us a “red tape” adventure. Turns out that until we get our paperwork filed, were not supposed to drive our car. So we very carefully drove to a rental place in nearby Fresno to get a car for the week.

This wound up being a blessing I disguise. You see, the van’s been going through oil and smelling over the past few weeks. What better time to get it checked out than when we have a rental car. Unfortunately, we ran outta time and had to leave the van near the rental place for the night.

Since we were in Fresno, we decided to get some shopping done. Totally scored a Lego Dimensions game for half off (I know it’s discontinued but we have all these figurines now and I’m curious, some Lego tape for mini-man, and lots of food! The real fun part was figuring out how to fit this all in our rental truck.

The following day we made a plan to get the car to the mechanic. While the kids and I had lunch at the McDonald’s in the local Walmart, Damon set about rearranging the cars.

While we were at Walmart, and just as Damon joined up with us, an amazing milestone happened – little-dude to his first steps! I love that they are side-ways steps, since he’s been practicing on the furniture that way 😆

After that, we decided to try some local pawn and thrift stores. Unfortunately, we struck out and didn’t find anything. But, we did hear from a local guy selling his PS3 and games for a great deal, so we went to meet him. Now we can play Lego Dimensions!!

After an accomplishing, and exhausting, day, we treated ourselves to dinner at BJ’s. 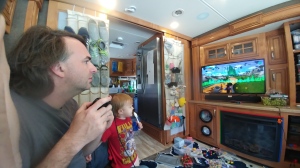 By Sunday, we’d done a lot and decided to have a nice day at home – which included installing and playing Lego Dimensions (of course 😆). That game is a lot of fun. I’m really glad that we got into it now, when everything’s on sale!

After a few hours of video games, we headed outside for some fresh air. Mini-man had fun with his bicycle and building set while little-dude practice walking with his toy truck (he’s getting pretty good at it 😍).

Still excited about the Lego Dimensions deal we found, we decided to head into Fresno for the evening and do some more shopping – where we scored a Cyberman from Doctor Who!

The next day was our nicest, and warmest day, during our stay, so we decided to head to Yosemite National Park.

Knowing that we had a two hour drive ahead of us, and to the cold no less, we prepared like crazy – food, drinks, toys, cameras, tablets, and anything else we could think of. Luckily, the kids fell asleep pretty quickly.

Another blessing in disguise for our car troubles – having the truck for this trip. Over two hours we saw lots of hills, winding turns, and complicated directions. At one point we had to follow a government snow plow to avoid a clean up crew working on a part of the mountain. This would’ve been a much harder trip in the van.

Speaking of the van, thank goodness we got into the shop (another blessing), it had a lot of issues – brakes almost gone, rear shocks shot, serpentine belt about to break, and cylinder head seals almost eroded. Imagine driving that up and down a mountain.

Since it was snowing in multiple areas of the park, we opted to take the more scenic route that was longer but didn’t require any snow chains. It was a fascinating drive – it was amazing to see how the road evolved over the decades.

Once we arrived, we parked at the visitors center to stretch out legs and check out the area. The kids were really happy to get out of the car. The walk to the center was so serene and beautiful – the smell of pine instantly relaxed me. And you can’t miss the half-dome in the background.

The visitors center had a cute walk-through that explained the history of the park. My favorite part was seeing photographs of the same fall from different time periods. The kids loved the hands on elements. After a quick stop at the gift shop (a must), we picked a few areas to visit and headed back to the car. 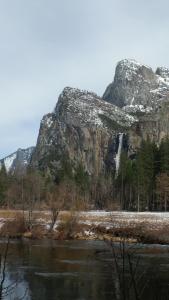 Time sure flies when your having fun – we managed to spend two hours in this area! With a long drive ahead of us, we decided to just hit a couple of places. First was Bridal Falls, one of the many gorgeous water falls in the park. Since Glacier Point was closed, the road to half-dome, we continued on.

We then stopped at Tunnel View, a stop that gives an amazing overview of the valley. It was amazing to me to see the beautiful views and the juxtaposition of the snow capped mountains with the green valley below. 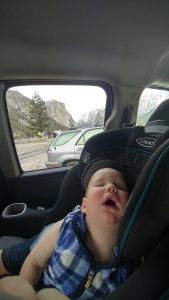 At this point, both boys had fallen asleep, so we decided to head back home. So glad that we got to experience this gorgeous park.

Our last full day and we were busy! It’s so great that we’ve accomplished so much during this stop – car, paperwork, video games, children’s museum and Yosemite – which led to a very busy last day.

First up, visiting the thrift stores and pawn shops one more time. Unfortunately, we struck out again. This trip hasn’t been great for our thrifting. We did walk away with another Lego Dimensions character. Can’t wait to see if we find any new ones in the next city.

On our way to the grocery store, we finally got the call that our car was ready! Woohoo! So Damon dropped us off and raced to drop off the rental truck and get the van. Luckily, the people at Enterprise were really nice – not only did they stay later for us, they drove Damon to the repair shop!

Meantime, I was chasing mini-man around Walmart, while trying to calm a very tired little-dude. I finally wrangled mini-man and took both kids to the toy aisle to play. Thank goodness for the toy aisle.

With a long drive in the morning, I’d hoped we’d go to bed on time. No such luck, both kids seemed wired once we got home, with mini-man becoming so over-tired that he became delirious and extremely loud. I guess we tried to do too much.

Just another lesson learned, I guess. At least we have some fun things planned for the kids at our next stop – San Francisco.