This leg of our journey started as a comedy of hurdles – just as we cleared one, another one pops up, attempting to trip us up.

We start at 330a when mini-man decided to wake up to make noise, which woke up little-dude. They went back down around 7a. With a long drive ahead of us, Damon went to get some more sleep while I stayed up (hate not being able to go back to sleep). Hurdle #1 cleared!

Around 8 Damon was up, so he finished our prep to leave. Of course when we want to leave, can we can’t – the jacks wouldn’t lower due to low voltage (I guess this program is a girl since it doesn’t say what it means). According to the internet ( thank goodness it decided to work), it means that a breaker, somewhere under the couch had tripped (why are these important things hidden?).

While Damon hunted for the breaker switch, I sat trapped under a sleeping baby freezing since we’d already unhooked and hadn’t turned on the main heater yet. After a bit of a search, the breaker was found and we could raise the jacks. Hurdle #2 cleared.

As we pulled out of our space, the downward hill caught Damon off guard and he stopped short, causing the van to hit the bumper. No damage (thank goodness). Sailed over that hurdle!

Now, were finally on the road and we lose cell service. Usually, I take this time to update our blog posts and catch up on our social channels. This becomes really hard to do when I have no cell service. So to help, Damon pulled over and hooked up our hard-drive to my tablet so I could at least watch something along our journey. Hurdle #4 no problem.

Back on the road, we encountered our next hurdle – the 101 highway. This is a scenic highway that drives along the Pacific Ocean. While beautiful – it’s definitely not fun to drive with an RV. It also added an hour to our drive time. Amd, ok top of that, we had a lovely layer of fog to contend with. Hurdle #5 survived. 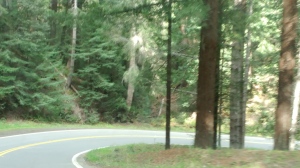 After four hours, we pulled into Eureka for lunch and shopping. This was the first time in a week that we’d been close to any big shopping areas and really needed to restock. After grabbing some lunch, we headed to our favorite place – Walmart. Unfortunately, it’s not easy to tell a Super Walmart from a regular Walmart anymore and this one was the latter. This means that their grocery section is very small. I was not happy that we couldn’t get that much.

To solve this, we found a local grocery store and managed to get some more stuff. This is one of the harder aspects of being on the road – you can’t always get the items you are looking for (especially in smaller towns).

At this point, we were all really tired. Little-dude was already asleep and mini-man was in desperate need of a nap. With about 45 minutes left to go, the boys and I all took a nap. Unfortunately, as soon as Damon pulled into the RV park, both boys woke up – and they were cranky.

I wish I could say that this was the end of our troubles, but as you will see in the next post, it was just the beginning.