I’ve been looking forward to this stop since we started planning this leg of our journey. Why? Because it’s packed full of awesome things for is to do with the boys – two aquariums!, A children’s museum, parks, and a zoo!

As much as I wanted to hit the ground running, we were stopped by summer colds (and we were doing so well on the illness front). Luckily, we seem to get it at different times, so each of us had their bad day apart from everyone else.

We did push ourselves a little in order to get food and some things for the playroom. We currently have a TV in the upper corner of the playroom, but it’s hard for the boys to see. So we’ve been on the hint for a smaller TV that we could mount lower. After scowering thrift stores, regular stores, and the internet, we found just what we were looking for on Salt Lake City? In fact, they’d just put out this TV as Damon was standing there!

As soon as we put, mini-man knew where we were and wanted out of the car. We were definitely going way to slow for him.

We spent almost three hours walking around each exhibit several times and saw lots of fish, frogs, sharks, and many other animals. This place was the perfect mix of everything the kids are interested in at the moment.

When we got back, the boys were still energetic, so we tried to take them to the playground. Ha! That lasted less than a second as mini-man headed straight for the pool.

And somehow, after all that we managed to finish a lot of projects in the playroom. The new TV is mounted and hooked up to internet, the shoe rack is fixed, and the play cabinet knobs are secured. No wonder we were all tired by the end of the day.

After seeing the the following week brought temperatures in the 90s+(!), we decided to take advantage of the nice Saturday and visit the Hogle Zoo.

At first mini-man wasn’t into it. Then we saw the giraffes. Suddenly, he became very invested and started going from exhibit to exhibit, very excited. His favorite, by far, was the phephants 🐘

Unfortunately, we had some problems getting to the zoo. The van was having some issues with the electrical system – sometimes it worked and sometimes the battery was dead or the car had very little power. After getting it checked out, we learned that we needed a new alternator. At least we could get it fixed fairly fast. 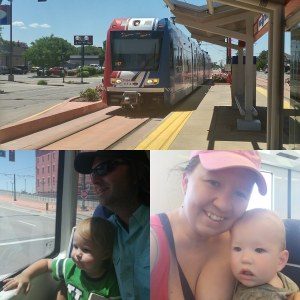 By Monday, we felt adventurous and decided to explore Salt Lake City. We took the trolley, conveniently located next to our campsite, and headed to Temple Square – home to the main temple for the Church of Latter-Day Saints. 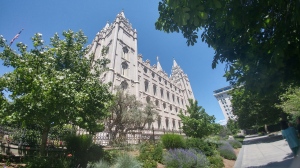 This place was beautiful. Everyone was friendly and welcoming. It felt like a very calm place to worship.

Since there wasn’t much for the boys to do at the Temple, we moved on and went to the Discovery Gateway Children’s Museum.

This place was built for Damon – you could build, play pretend, and it had a lot of variety.

The boys had fun too – it was a great place for them to explore and get some energy out.

At this point, I was starving. Having walked around downtown in 100+ heat, I was in no mood to cook, so we went to the Cheesecake Factory.

Unfortunately, we didn’t know the trolley system that well, so we walked 15 minutes in the heat, only to learn that the trolley stopped right at the restaurant 🤦.

Fortunately, this lesson came in handy for the journey home, and the next day, when we went back for dinner. 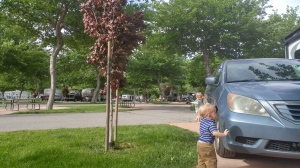 We accomplished quite a bit in our first week in SLC, and we were just beginning.