“Funny, I thought it was pronounced ‘I-OH-Wah'”

The Music Man is one of my favorite movies. And every time I hear Iowa, I think of this line when Professor Harold Hill first gets off the train in Iowa.

But before we actually get to Iowa, we had a few stops to make. 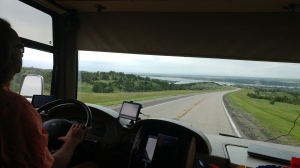 After having some fun at Mt. Rushmore, we headed east, across South Dakota, and stopped in Chamberlain. Along the way, we passed a time zone and got pushed back an hour – which sucked since we had to adjust our schedules (from driving to sleeping). 😑

Although we only stayed one night, the campground was nice and have us a good place to play outside.

We started just before noon the next day for Sioux Falls and arrived fairly quickly.

This proved wonderful as it gave us time to go run errands. The boys were thrilled to get out of the RV. We even scored a cute power wheels for little-dude for just $3!

After a long night, we spent the next day relaxing and enjoying

We spent our last day exploring Sioux Falls. First stop was the butterfly garden and aquarium. This place was adorable. The first room had cute aquariums fill with fish and a touch tank with the friendliest rays I’ve ever seen (truthfully – they liked attention and interacting with people).

The next room was the butterfly room and it was filled with butterfly’s. Little-dude loved it. Mini-man didn’t mind them but didn’t like them coming near him.

The butterfly garden and aquarium were in a park with an incredible playground – comprised of several climbing towers, suited to kids of all ages. Mini-man had a blast checking out each tower.

After a quick stop at a thrift store (where I found these awesome Disney record books), we headed back to the RV for some pool time.

I’m super proud of little-dude, who is getting used to the water and even had fun in his float.

Afterwards we stopped by the camps playground for some more fun. It was an interesting playground as it was completely surrounded by tents. When your camping, it’s considered a common courtesy to not walk through other people’s sites. So we were confused as to how we were supposed to get to the playground with walking through a site. We have up and just walked through an empty site.

You’d think that after all that the kids would go to be on time – nope. Midnight bedtimes and both woke up at 7a. At least we got an early start for our five hour journey to our 28th state, and our stop for the Fourth of July – Des Moines, Iowa.