Meet me in St Louis is one of my all time favorite movies. I love the look at this time period and the celebration of the worlds fair. Despite all of the news reports around St Louis, I really wanted to visit and have been looking forward to this stop for a while.

After a late night, we woke up mid morning and were on the road by 1030. The drive was fairly entertaining – never have I seen such a wide variety of billboards, covering almost all topics. My favorite was counting the number of billboards for the a candy store – 30 signs in 39 miles.

We chose to stay at a state park just outside of the city – absolutely beautiful park and in a pretty safe area (didn’t want to take any chances). After finishing our usual setup, we headed out to pick up some stuff that we needed.

First stop – Goodwill, of course. We found some great stuff – a new Bluetooth keyboard for my tablet (which makes writing a lot easier), a new swimsuit for me for $1.50, and a toy car for little-dude. He was so cute when he found it – like a moth to a flame. He saw it and was just drawn to it. I couldn’t leave without it 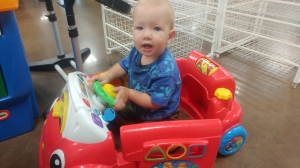 Next we hit up Walmart and Sam’s club to stock up on more fruits and vegetables. The car was definitely full when we were done. At this point, mini-man discovered the car that I bought for little-dude and he claimed it as his own.

Although I didn’t sleep at all, I wanted to go out. With just three days in St. Louis, I didn’t want to waste anytime. I heard a lot about a local place called City Museum – a large museum in a warehouse that is built large enough for adults to have fun. I was worried if the boys would enjoy it, but Damon and I both really wanted to go, so we took a shot. 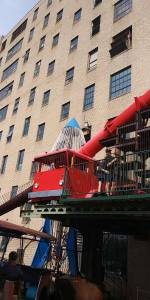 OMG, I’m glad that we went. This place was amazing. Unlike other places that have defined spaces, everything here flowed together and intertwined. The amount of detail was amazing – anything that could be something to inter act with, including the balustrade on the staircase. Damon loved seeing how everything worked together.

We started our second day a bit late thanks to another sleepless night. Which is unfortunately because there was a lot we wanted to do. After two hours in the car, running errands, the boys were getting figity and I was low on patience.

To help, we stopped at a local playground that had elements both boys loved – climbing. for mini-man and water play for little-dude. 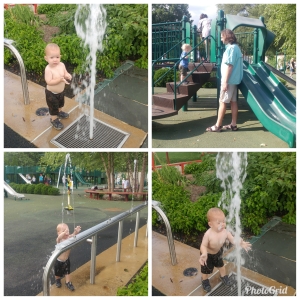 After some playing, we headed to a different area of the park that was the central hub of the 1904 World’s Fair. As a huge fan of Meet Me In St Louis, I couldn’t pass up the opportunity to visit this place that was essential in the movie. It was neat to see how similar the area was to the movie. 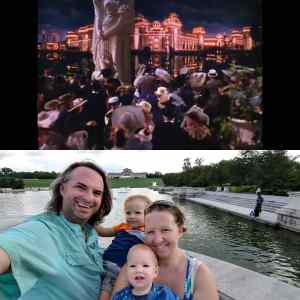 On our last day, we got no sleep, again. But I was determined to get out. It was our final day and there was so much we wanted to do. First stop – City Museum. 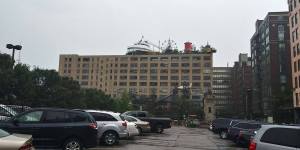 Mini-man was excited when we went inside the building and lead is straight to the toddler area. It’s amazing how much there is to do in just this area.

We discovered how the museum got it’s name when we made it to the fourth floor – where they had lots of exhibits and displays with St. Louis statues and building exteriors from all eras. It was amazing to see the detail up close.

By the end of our visit, it stopped raining and the outdoor area opened. Knowing Damon loved stuff like that I let him go play while I took the boys.

Instead of going back to the toddler room, mini-man found the skateless skate park and had a blast climbing up and down while little-dude slept. When they closed, I had to, quite literally, drag mini-man out of the exhibit while carrying a fast asleep little-dude. Luckily, Damon caught up with us just as we left the exhibit and was able to help me. 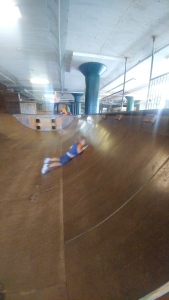 I guess it was a good day, as both boys were fast asleep in the car. This gave Damon time to get some errands done.

In retrospect, I don’t think we gave ourselves enough time to enjoy St. Louis. As we drove past the infamous arch, we saw so much more we’d like to see – like a riverboat ride, or a baseball game, or more thrifting, or a trolley ride. It feels like there is so much more left for us to do. But alas, we have a schedule to keep and an amazing amount of things to see in our next stop – Indianapolis.