Well our second time in Chicago was certainly interesting and confirmed one thing for me – I definitely don’t want to live here. Don’t get me wrong, there’s some amazing amenities and attractions but the combination of horrific traffic and excruciatingly, frustrating toll roads, makes Chicago not the place for me.

The upside to this stop is it was only 90 minutes to get there. But, this also means that our next drive is really long. After, we parked at our campsite, we took the kids out to play. Unlike the parking lot we boondocked at the last time we were in Chicago, this campground had a pool, playground, and minigolf. We had a lot of fun.

Unfortunately, not being near Chicago meant that when we wanted to get into the downtown area, it took almost two hours! Which is near impossible to do with two toddlers in the car.

Somehow we managed to make it into the City without too much stress, just in time for our sailing trip on Lake Michigan. Unfortunately, the weather people were dead wrong about the weather. Instead of beautiful weather and nice winds, we got very forceful winds that made the trip very choppy. We made it maybe five minutes before we aborted. If it were Damon and myself, we probably would have toughed it out. But we didn’t want the kids to be uncomfortable, so we went back.

Instead, we went to a playground to figure out our next move. We thought about a kids musuem or something to entertain the boys, but they were very tired, so we started the journey back home, with some stops along the way to make the drive easier. Unfortunately, traffic at 3p still sucks and took twice as long to get anywhere.

The next day, we tried to stay close to the campground and check out some thrift stores near by. While we enjoyed our hunt, and found some fun things, the driving was just unbearable. 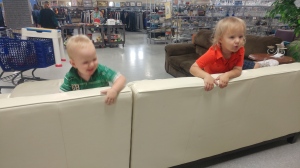 Our last day became an unexpected, adventure with some fun parts to it. We noticed mini-mans teeth needed some attention, so we took him to the dentist. Just as we thought, he needed some work. Unfortunately, he would barely let the dentist touch him without screaming, so we couldn’t address any of his issues. We decided it would be best to schedule him for surgery – it’ll be easier on mini-man and we can get everything done at one time.

The staff was fantastic and great with mini-man. All-in-all, he did pretty good – he didn’t bite or run away, he just screamed (which is understandable).

After lunch, we took him to the pediatrician to get a check-up and a form signed for his surgery. After so much, we decided to take him somewhere to play. We passed a children’s zoo by the dentist and decided to check it out.

Oh my gosh, this place was adorable. Really small, but it had a huge enclosure with the friendliest goats I’ve ever seen. Mini-man stayed there for an hour, following them, brushing them, and having a wonderful time.

Once we got home, we did what we usually do – we got ready to go. With so much that happened, we knew we had some re-planning to do for mini-man’s surgery. At least its really easy to make new arrangements. Plus, we might get to do some fun stuff along the way. Now to face a six hour drive to Cleveland!!!