Now that mini-man’s surgery is behind us, it’s time to get back to our original route. to save some time, we eliminated a few stops. Since Toronto was far from Elgin, Illinois, we decided to go to an area just outside of Detroit, Michigan first. 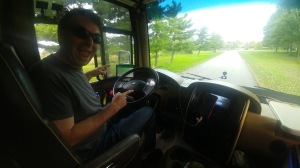 This was still a long drive – six hours – so, we made sure we prepared as much as we could the night before. Damon got up early to finish, and had us on the road by 8a. Just like our six hour drive to Cleveland, we broke up the drive into shorter sections. Our first mini-stop was to meet up with a lady who was selling her Rokenblok – our collection is getting quite large. After a quick stop for gas, we headed to our lunch break.

As we crossed the line into Michigan, the road instantly became very rough. So rough that things started to fall down. Then we heard a crash! Our microwave door flew open and the glass plate inside flew out and shattered. Damon pulled over and helped clean up the mess.

By the time we stopped for lunch, the boys were more than ready to get out. We went inside to McDonald’s, just outside Kalamazoo, Michigan, where the boys spent over an hour playing in the playground. They really needed that outlet.

The rest of the drive was long, gray, cold, and wet. We were very glad to get to our campsite. Once we arrived, we got a not-so-great surprise – our car was dead.

We discovered in the morning that it wasn’t just a dead battery – the whole cars electrical system want working. We couldn’t start the car or open its doors. We tried jumping it several times but nothing happened. 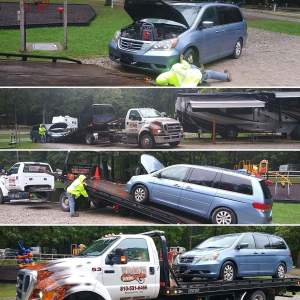 So we called for a tow truck to take the car to a local maintenance shop. A few minutes of inspection and we found the problem – a blown fuse. Under normal circumstances, this is an easy fix. But of course, with our reputation for really breaking things, we blew the one fuse that was only made for this particular make and model of car. Translation – it’s a very hard fuse to find.

After a few hours of searching, the garage found the part we needed but it was going to take a day to get. At least our schedule was flexible, so we extended our stay for another day.

The lack of car made our extra day rather difficult. We’d run out of most of the boys favorite foods and needed to shop. We hoped that we’d get the car back early so we could go out. No such luck – we didn’t get it back until 4p. Not too bad in the grand scheme of things, but difficult when you have two hungry kids. Normally, we called a ride service, but this was a small town and we couldn’t find anyone offering rides. Once Damon got the car, he grabbed some lunch for the boys but it still left us without groceries. 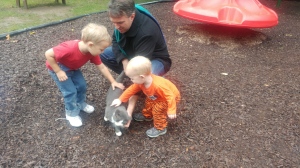 We decided to go shopping during our trip to Toronto, once we crossed the border, which ended up creating another long day. Sounds simple enough – drive an hour into Canada, shop/lunch, then two hours to the campsite.

Well, it took much longer than that. First – we all slept in later than we expected, which pushed our departure to 11a. We made it to the border just fine and made across with no complications – which surprised me since we’re driving a 40ft monster. Then we lucked into a Walmart with a McDonalds, so we could stop for lunch and shop all-in-one. However, we had a bit of a list and, of course, this Walmart wasn’t the same as the ones in the states. It had different products and it was layed out different. It took us over two hours to get everything we wanted. 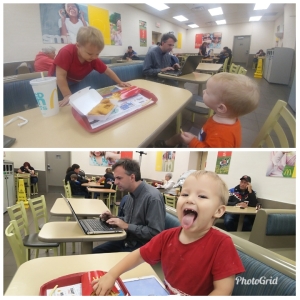 When we got back to the RV, Google showed the rest of our route had doubled to four hours! When we finally made it the campground, I’d hoped we were in the clear. After Damon set up, he came in and we started to hear the sound of water rushing. Then we saw water puddling in the kitchen. We turned off the water instantly, but could see where it was coming from. We think the water pressure of the water spicket was high and burst our hot water line. Just what we needed. 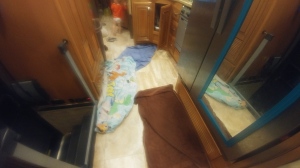 After sleeping in and getting a few chores done, we ventured out into Toronto. Since we were short on time, we decided to check out some thrift stores. At our first stop, I scored some awesome sweaters – the really nice, thick kind that just don’t seem to exist in the South (unless they’re hundred of dollars). Damon saw what I found, and excitedly found some he liked too. The boys even walked away with some finds – bells for mini-man and a flip cell phone (a real one from 10 years ago) for little-dude. 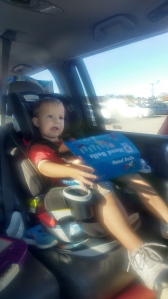 Friday was our latest day of sunny (but still cold) weather, so we decided to check out the Toronto Zoo. What we didn’t anticipate was how cold it was going to be. Most of the time, the boys were content to stay in the stroller, eating and watching iPods. Damon and I just turned it into a nice “date like” walk for ourselves. The other unfortunate part was the group of 500 school kids – all you heard were grown-ups yelling at them to behave. Couldn’t have been fun for those kids. We tried to get away from them, but 500 is a hard number is avoid. 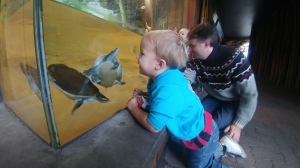 Aside from these set backs, we did enjoy seeing the animals and the boys did get out of the stroller towards the end – so that’s a win.

Cold and hungry, we took the boys to lunch – which they greatly enjoyed and seemed to reenergize them. So we went back to the thrift store, where got some great sweaters for the boys and mini-man literally walked out with this huge art set that he just had to have 😂. 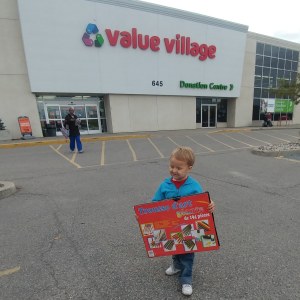 Saturday we decided to keep the kids home and just have some fun playing. Damon went out for a bit to run some errands while I stayed with the boys. Part of the frustrating part of being in Canada is you can’t always find want you want – like my yogurt, which isn’t sold anywhere!?! After getting about half of the things we wanted, Damon came home and we decided to try again the next day. 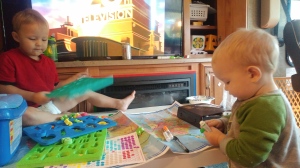 That night was one of those worst night parents experience. One kid falls asleep, the other one is up. When you get the second kid to fall asleep, the first wakes up and wants to play. Then the second wakes up a short time later. I was up until 230a and Damon was up til 5a! And, for some reason, the boys were both up by 9. I let Damon sleep until noon since he’d been up all night. 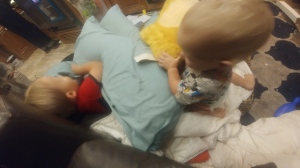 After noon, we set forth to find more food. We’d recently learned that the following day (Monday), was Thanksgiving in Canada, and almost everything is closed. Not wanting to go a day without a our essentials, we went out.

After a quick stop at McDonald’s, we headed to Costco – which was slammed! People were circling and honking to find parking spaces. We cheated and took a spot near the loading dock (it didn’t say we couldn’t😇). At least we knew what we wanted and got out quickly. As we were checking out, I ran to the bathroom. When I came back, Damon was signaling me to hurry. Turns out, Costco’s in Canada only accept MasterCard (we have Visa). I always keep emergency cash on me for time like this, which is why Damon was signaling me. However, it was US currency and our cashier didn’t know how to process it. We apologized profusely to the people behind us while we waited to a manager. They were all very nice and had a laugh about it. 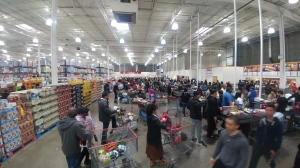 I was worried about our Walmart stop, but it wasn’t nearly as bad and we got done pretty fast.ans wouldn’t ya know it, the boys both fell asleep on the way home. This led to another late night – 2a for both this time. 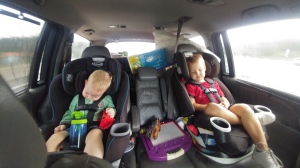 We left the campground early to get a jump on the four hour drive to Ottawa. Fingers crossed for a smooth journey. 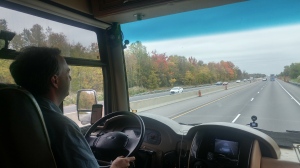