With the holidays fast approaching, I really wanted to get to a stopping place for the year and avoid traveling during some of the busiest driving days of the year. With that in mind, we decided to speed up our journey to the South by spending just a day at each stop.

First up, was our 41st state – Delaware. With the boys and I all being sick, our day started off late so Damon could get a little sleep before driving. Luckily, it was only a short, one hour drive to our next stop. We thought it was smooth sailing once we got on the road, but once we got on the highway, Damon realized we needed cash for some upcoming tolls. I always keep cash on me, but since I’d been sick, I had no idea where my wallet was. We proceeded to spend the next 20 minutes pulled over, on the side of the highway, looking through the RV and van for my purse. I finally found it in a backpack. Damon had the idea to put a bunch of valuables in it and assumed I’d put it away and find my purse that way. Of course I got sick, and he forgot about the bag. Annoying, but at least we found it and had plenty of cash to continue the drive. 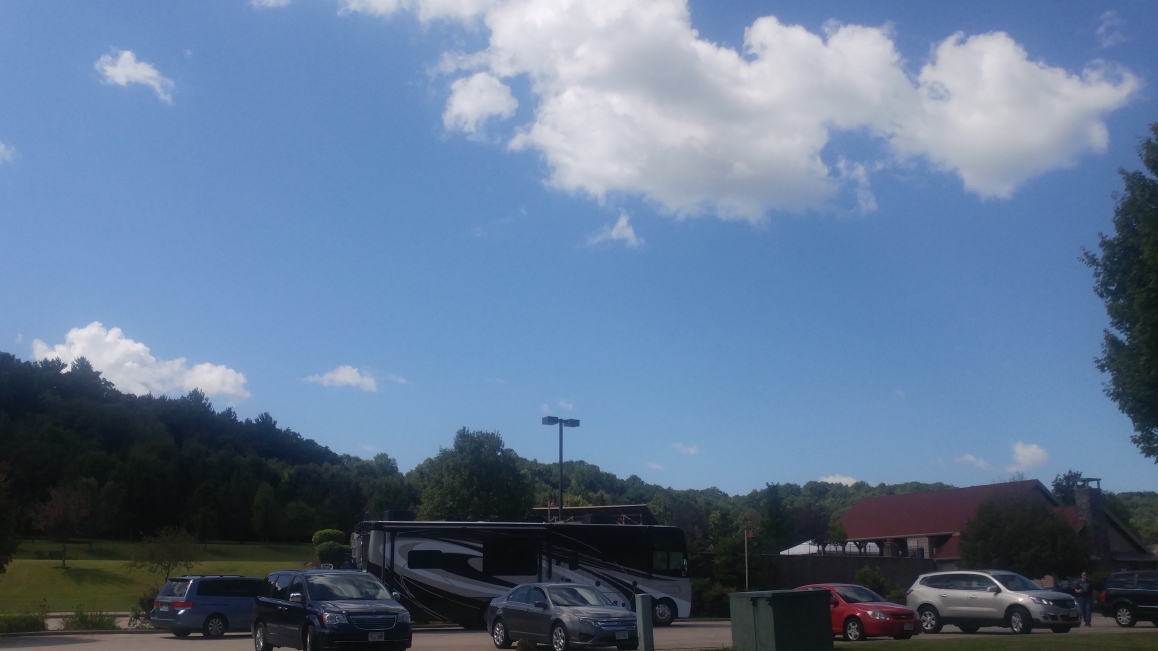 Normally, it isn’t a big deal to just run to a bank and get more cash, but when your driving a 40ft RV, maneuvering small streets and parking lots can be stressful and complicated. Glad we could avoid that.

The rest if the drive was uneventful. After we set up, we all took the chance to rest and recouperate. 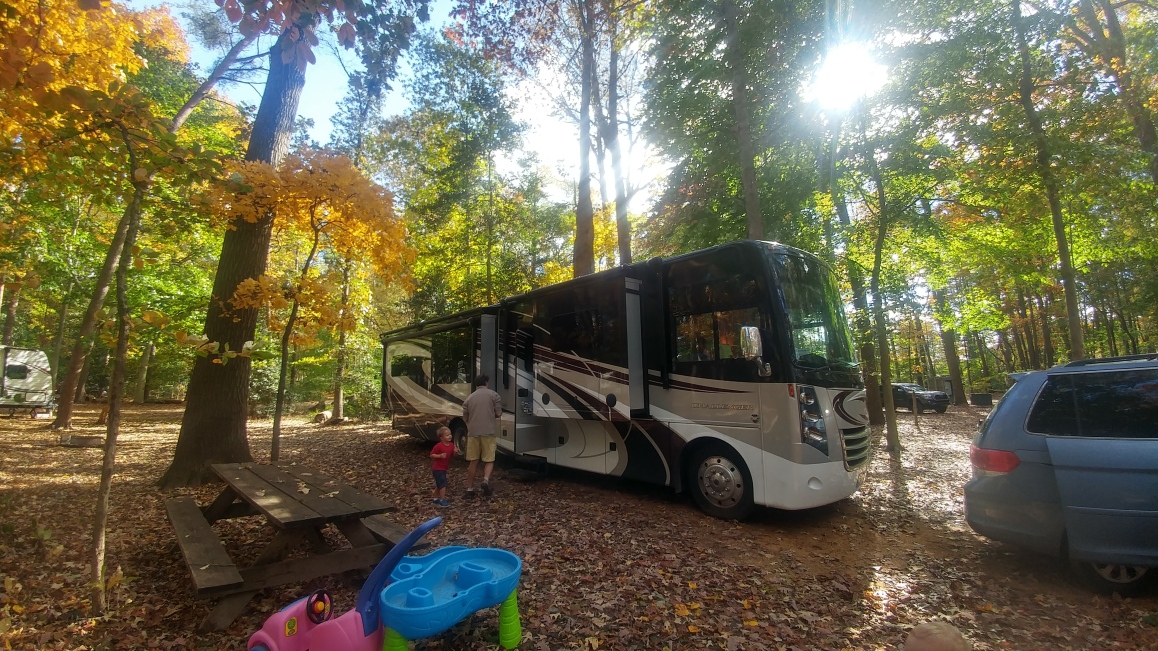 Our only day in Delaware gave us some gorgeous weather, so we headed to the playground. When they had some fun, the boys constantly get cold and it limits their ability to play. So we loaded them into the van and headed out to lunch. 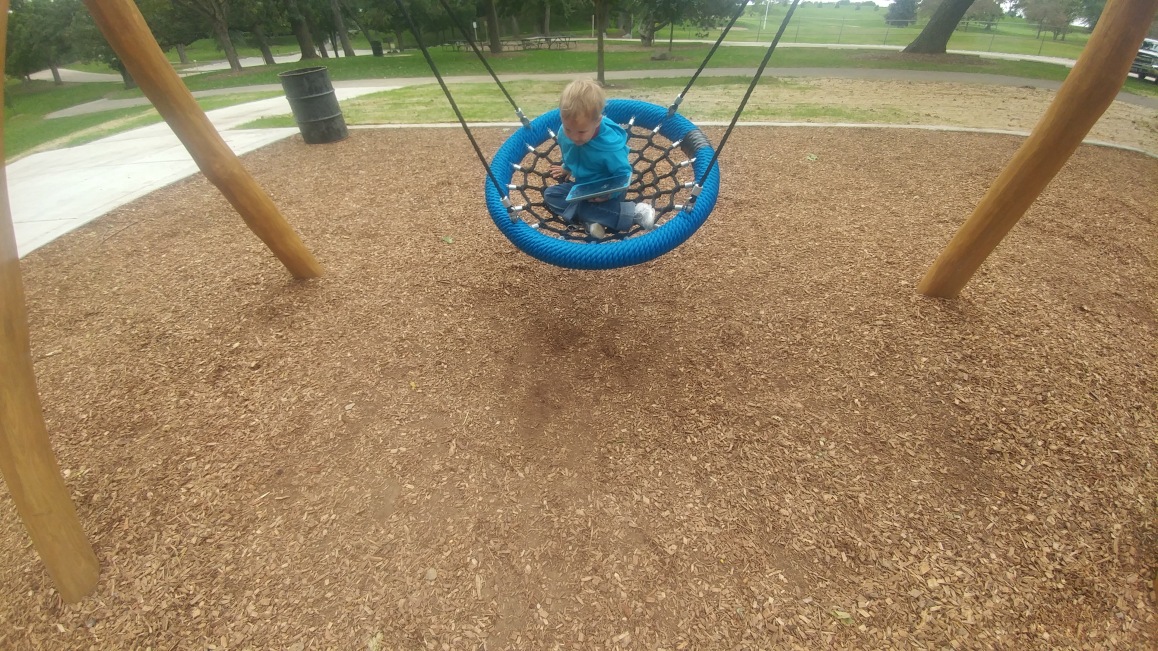 This allowed us to drive to some local thrift stores, where I scored this adorable singing snowman and penguins. Damon thought I was nuts but, to me, it embodies the magic of Christmas. However, once the boys saw it, they claimed it as their own. It’s so cute to see them dancing to these cute penguins.

Thanks to daylight savings, we were up pretty early on Sunday, which have us an early start in our drive to West Virginia. It also turned into a blessing in disguise – the one time a year the Maryland bridge is shutdown for a 10k race happened to be that very day. Thanks to the way start, the delay wasn’t too bad. 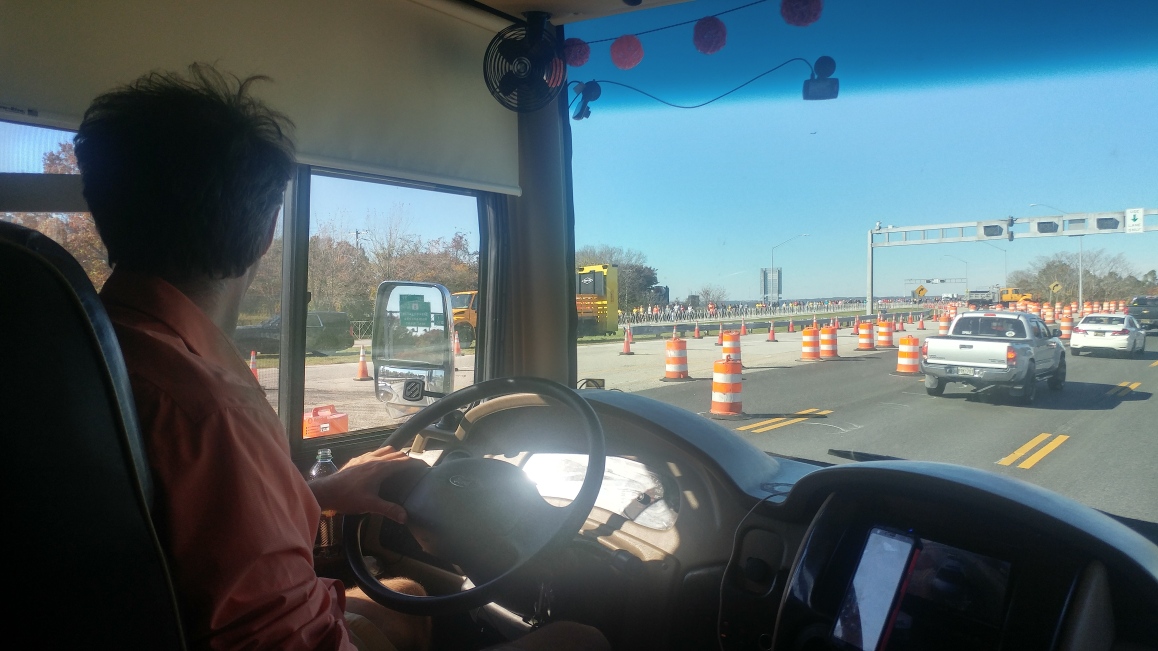 Once we arrived, it was our one nice day, so we hopped into the van, grabbed some lunch for the boys and headed to Harper’s Ferry National Park. 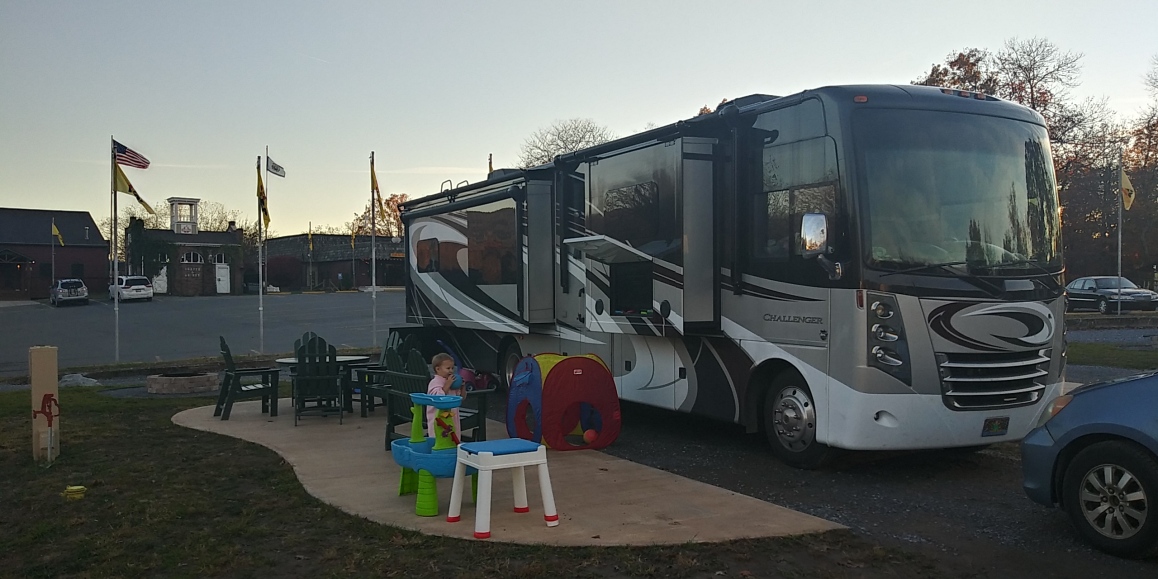 This park is home to historic Harper’s Ferry, a civil war era town with roads and buildings still intact from 150 years ago. It was also the meeting point of three major trails, including the Appalachian Trail. Technically, we walked along that very trail through the town, which is pretty cool. 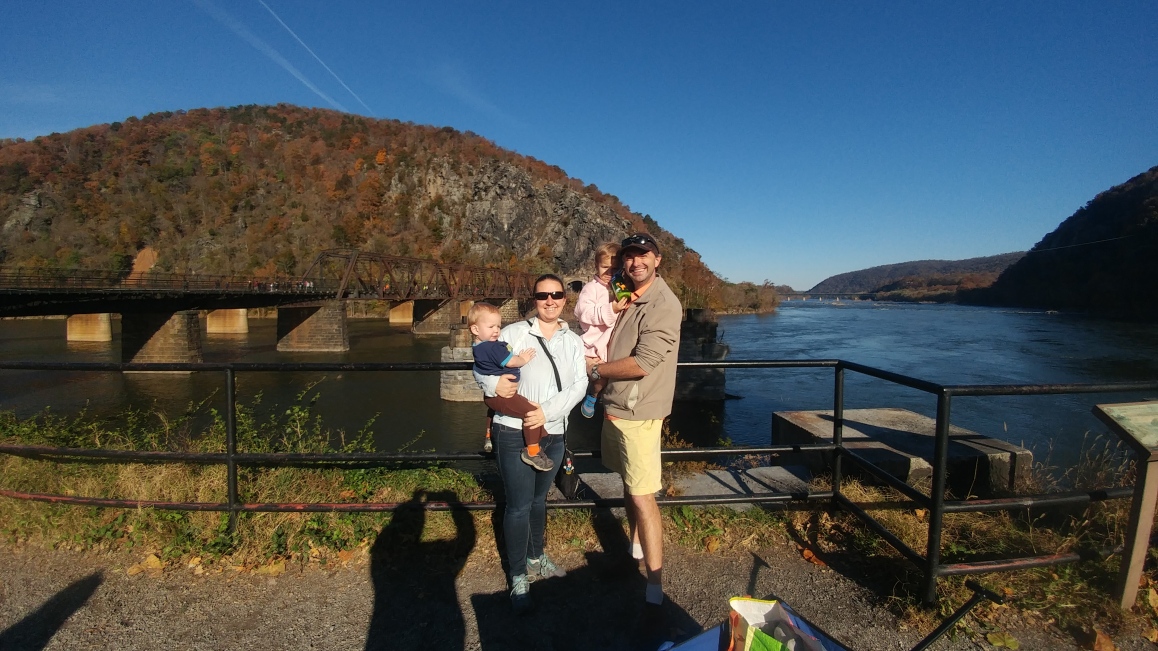 It was fun to walk around with the boys. They liked walking around, but they got cold very quick, so we only spent an hour there. But it was enough to get a good overview of the town. 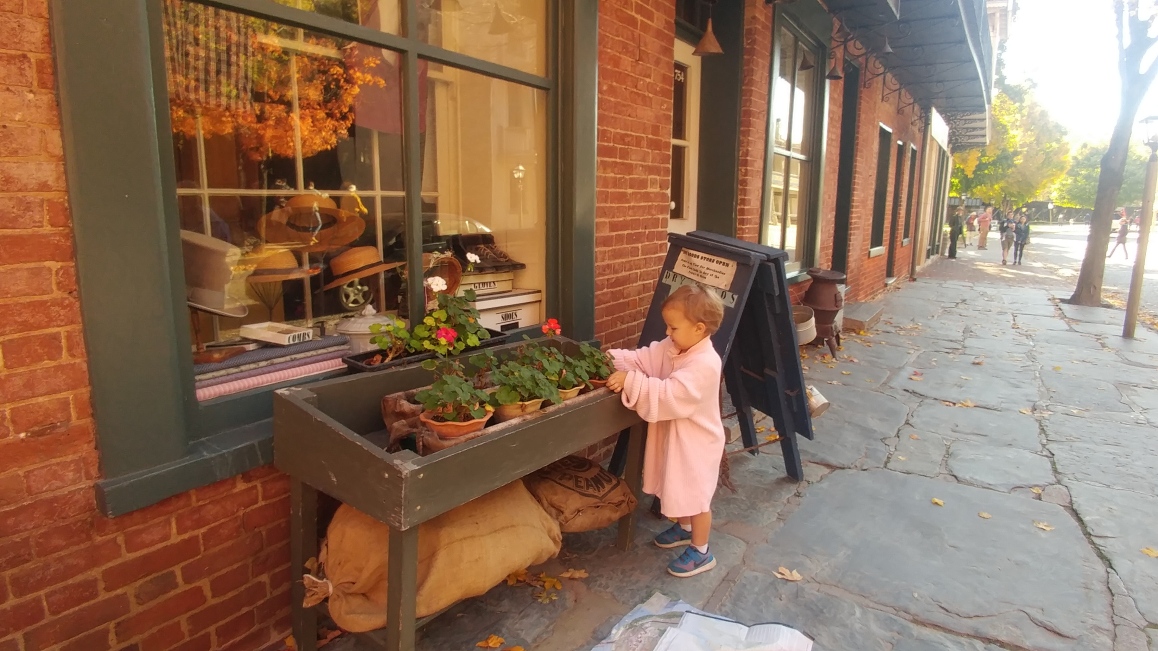 Once we get back, little-dude passed out, so Damon took mini-man to play some mini-man golf. One thing I love about staying at KOAs are the great activities they have for kids. 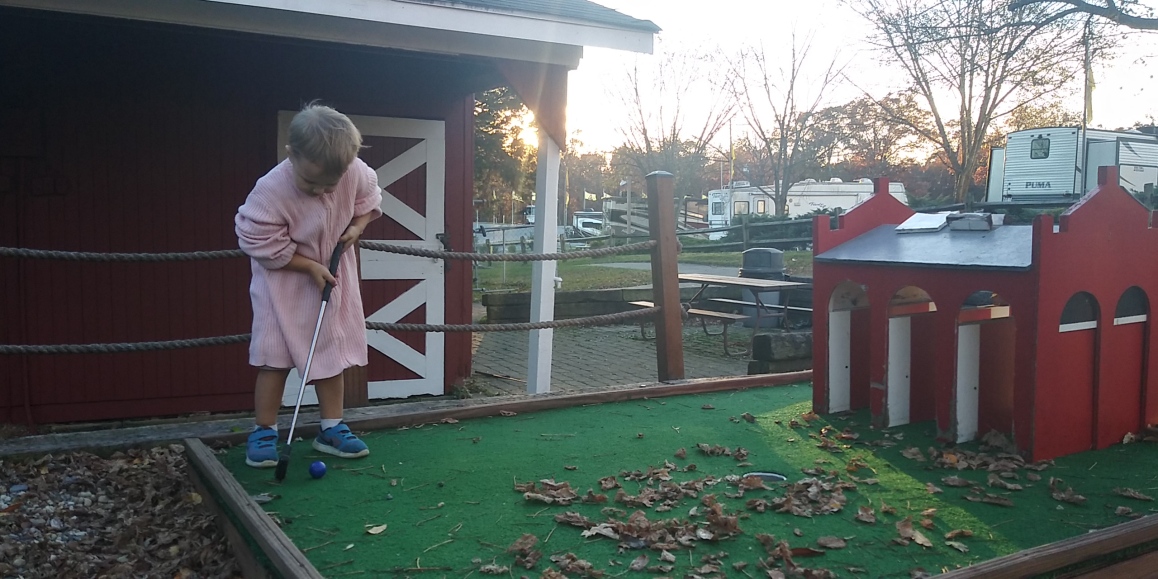 The next day was true to it’s word – it rained all day. One of the downfalls of RV life is it can get a little claustrophobic when it rains. To help with this, we took the boys out for lunch and shopping. We needed the shopping desperately, but you can never tell how kids are going to react to stores. 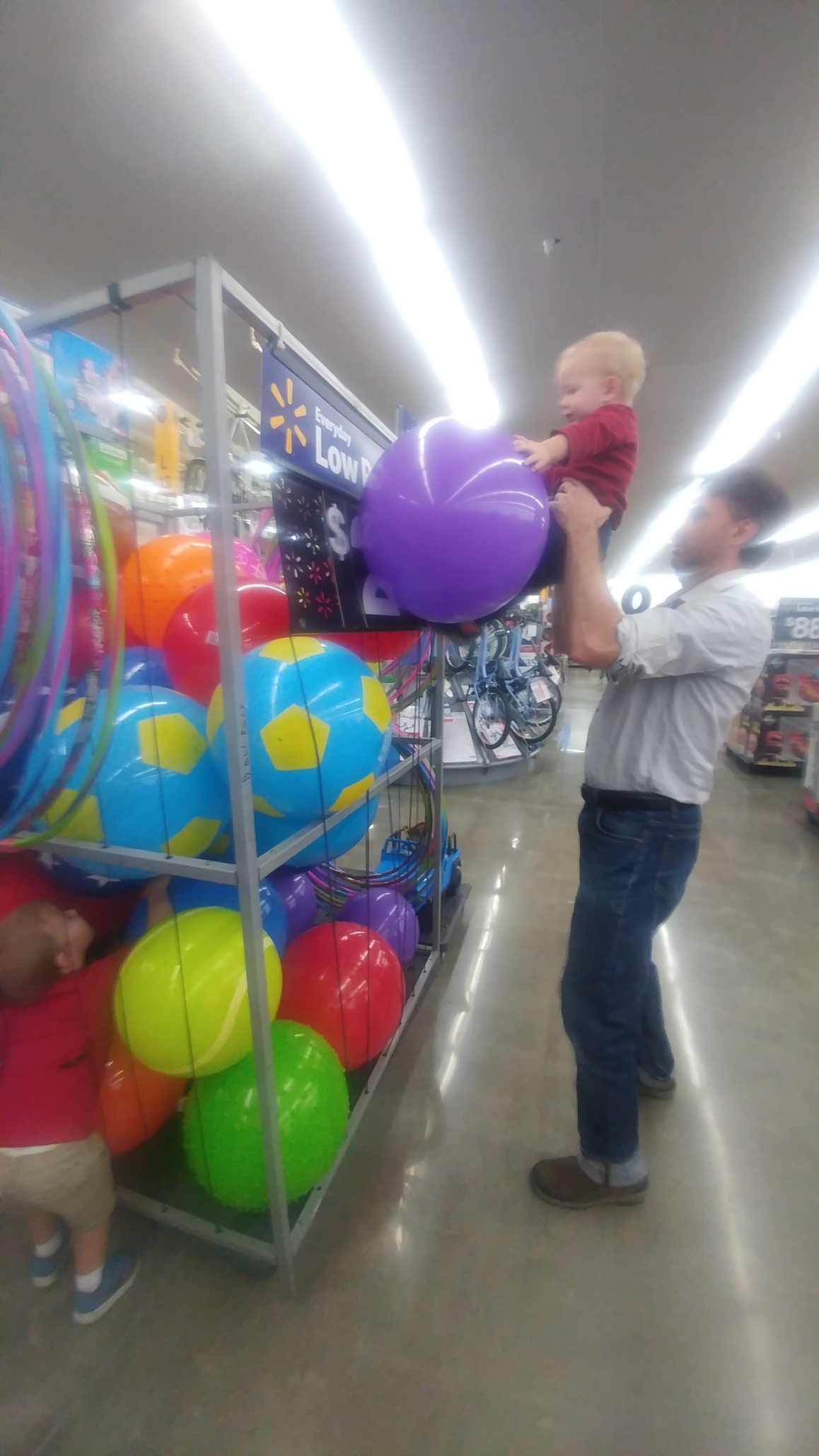 Turns out, they had a blast. Exploring Walmart and Costco was a lot of fun for them. Unfortunately, halfway through Costco, both boys started to run out of steam and we had to carry them through the store. One eventually fell asleep while the other was reenergized when we found a box of kinetic sand for him. That, plus a toy train we found, and he was good to go for the evening. 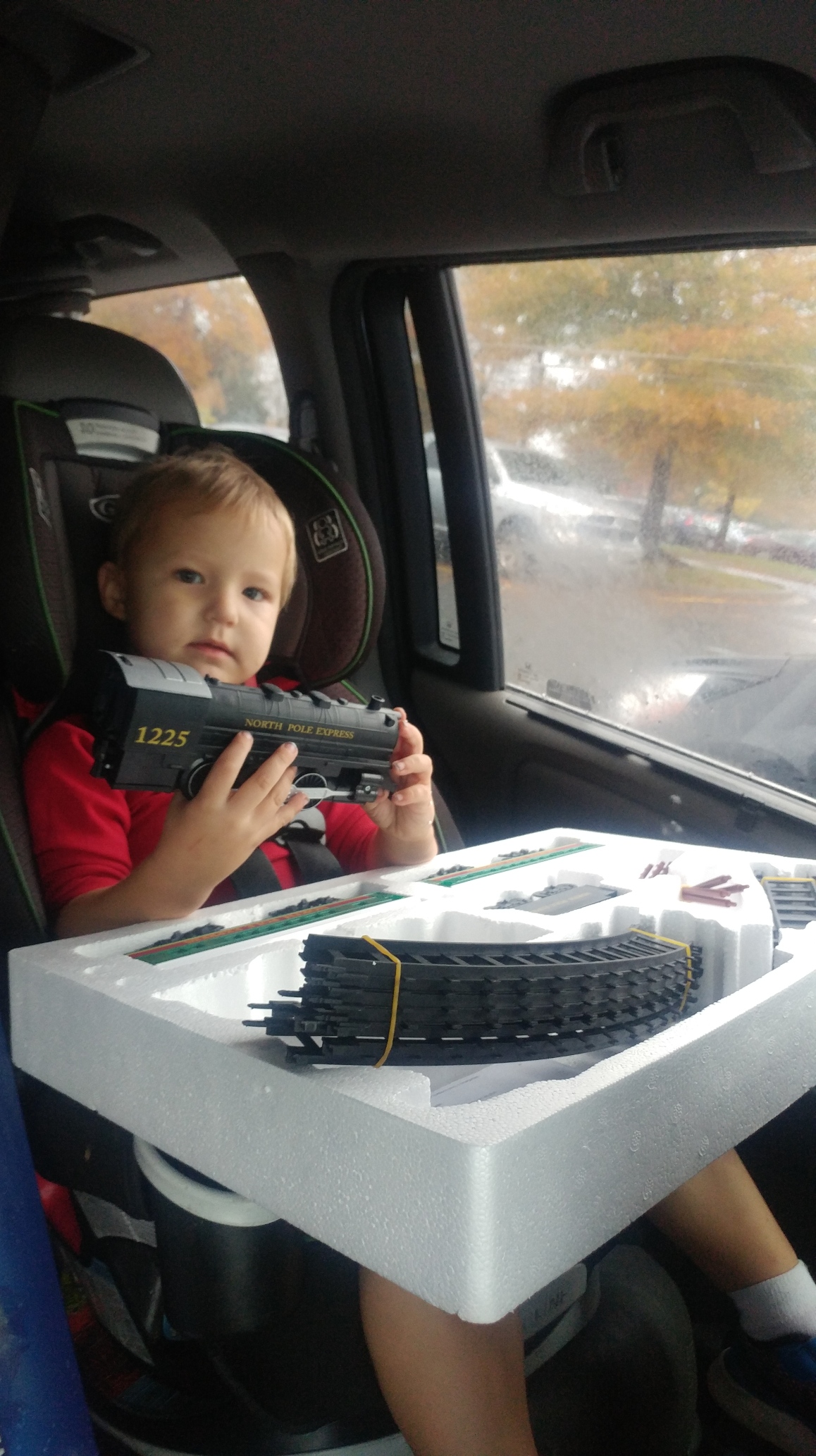 We started early the next morning, to tackel a five hour drive to Mt. Airy, North Carolina. The bonus to early starts is it’s easier to go longer distances with the boys. The downer for this trip was more rain. Rain makes it harder to drive and colder inside the RV. It also didn’t help that the windshield wiper broke and stopped moving early in the drive.

After a quick lunch stop, we made it to our campground – Mayberry. This place has everything named after the Andy Griffith Show. We later learned it’s because the town of Mt. Airy was the inspiration for the town of Mayberry on the show. Pretty cute. 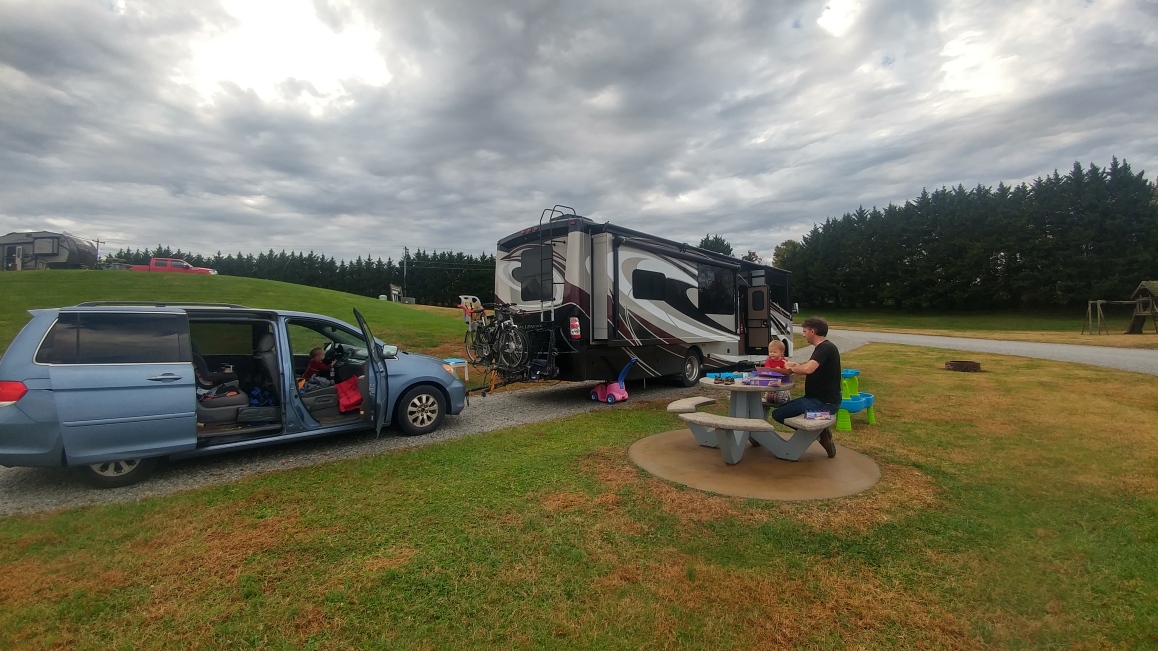 Once we parked, the boys made it known they wanted to play, so we hit the playground. Mini-man had fun swinging while little dude had fun splashing in mud puddles. Gotta love having boys. 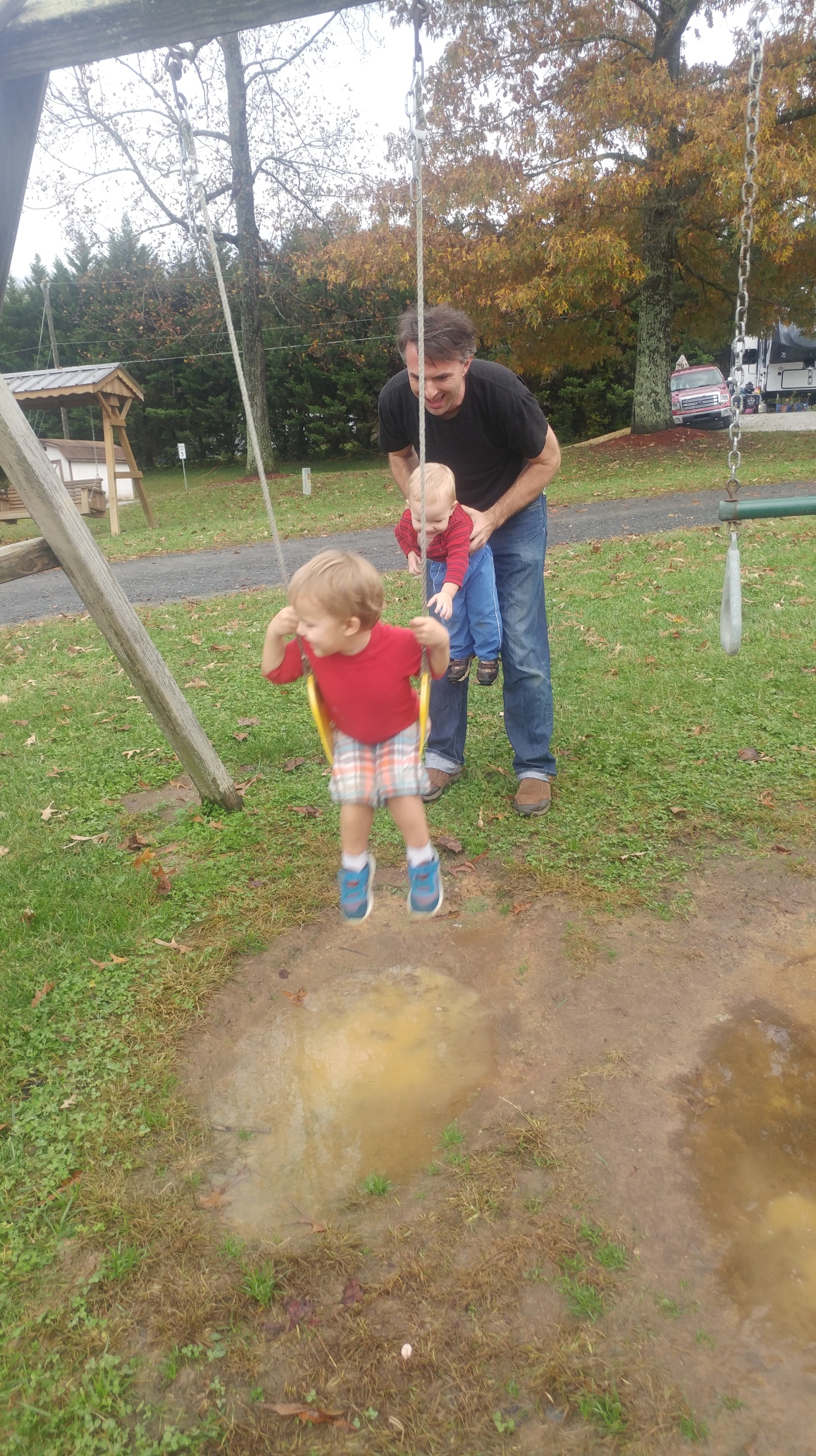 They next day was perfect outside – 70 degrees and blue skies all around. The boys and I played outside while Damon ran a few errands. It definitely proves were making the right decision to head south, towards warmer weather. Say what you will about Florida, at least you can enjoy being outside most of the time. And with two, true Florida little boys, it’s really hard to find them entertainment that isn’t outside.

Curious to see Mt. Airy, we headed to the small town. Unfortunately, we didn’t really see anything that resembled Mayberry, but we might have just been looking on the wrong street. We stopped looking when we found an adorable playground and jumped at the chance to let the boys get out some energy. It worked, as they were both out shortly after we got home. 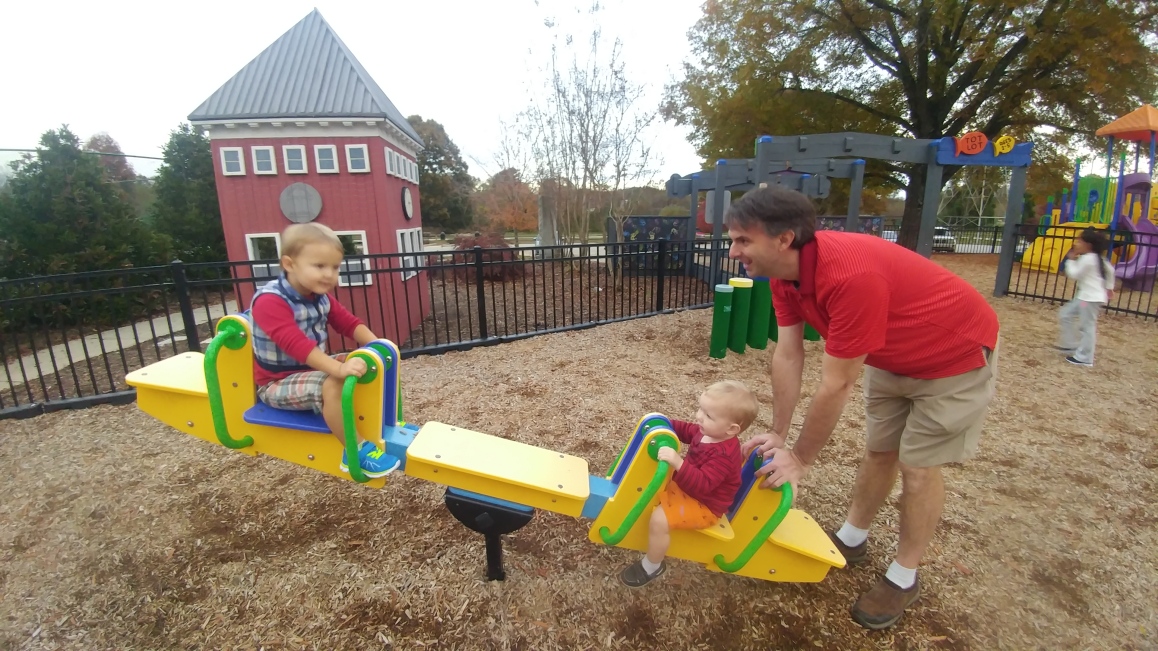 An early night meant that the boys were up bright and early. Not always great in the adult sleep department, but great in the driving department. Especially when rain was expected. One nice thing about this drive, is it was less than three hours. After a 5 hour drive the other day, 3 goes by really quick. 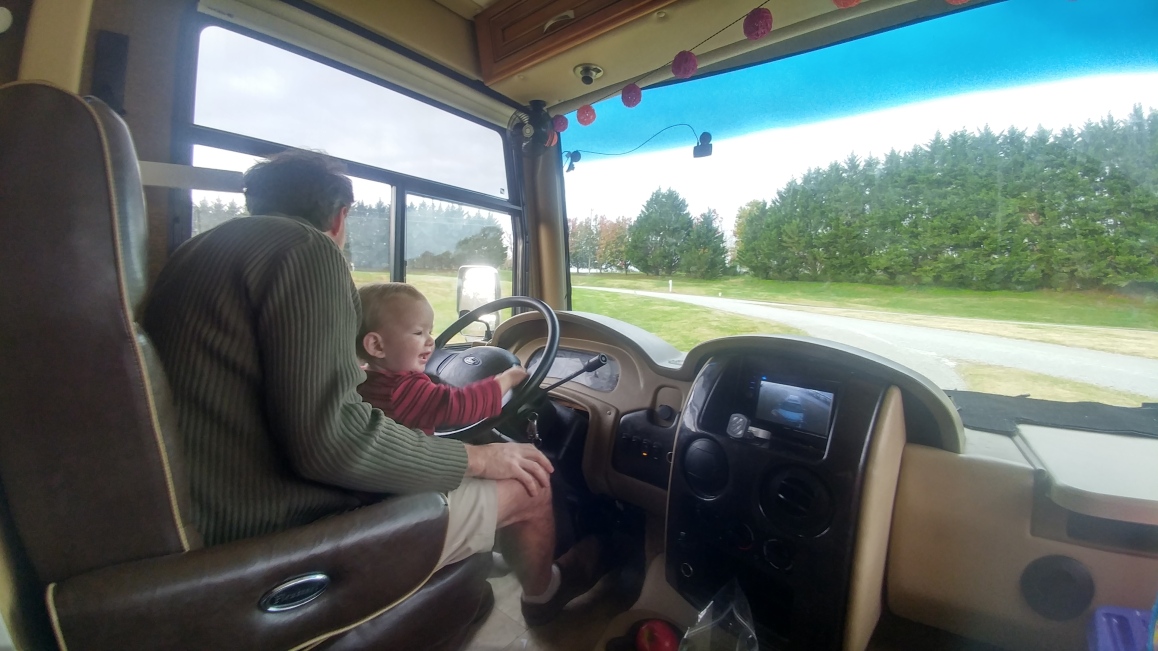 Once we hooked-up, per our new routine, we headed to the playground. However, our fun was cut short, thanks to an afternoon shower. While we hurried back to the RV, mini-man decided to take his time and enjoy the rain. 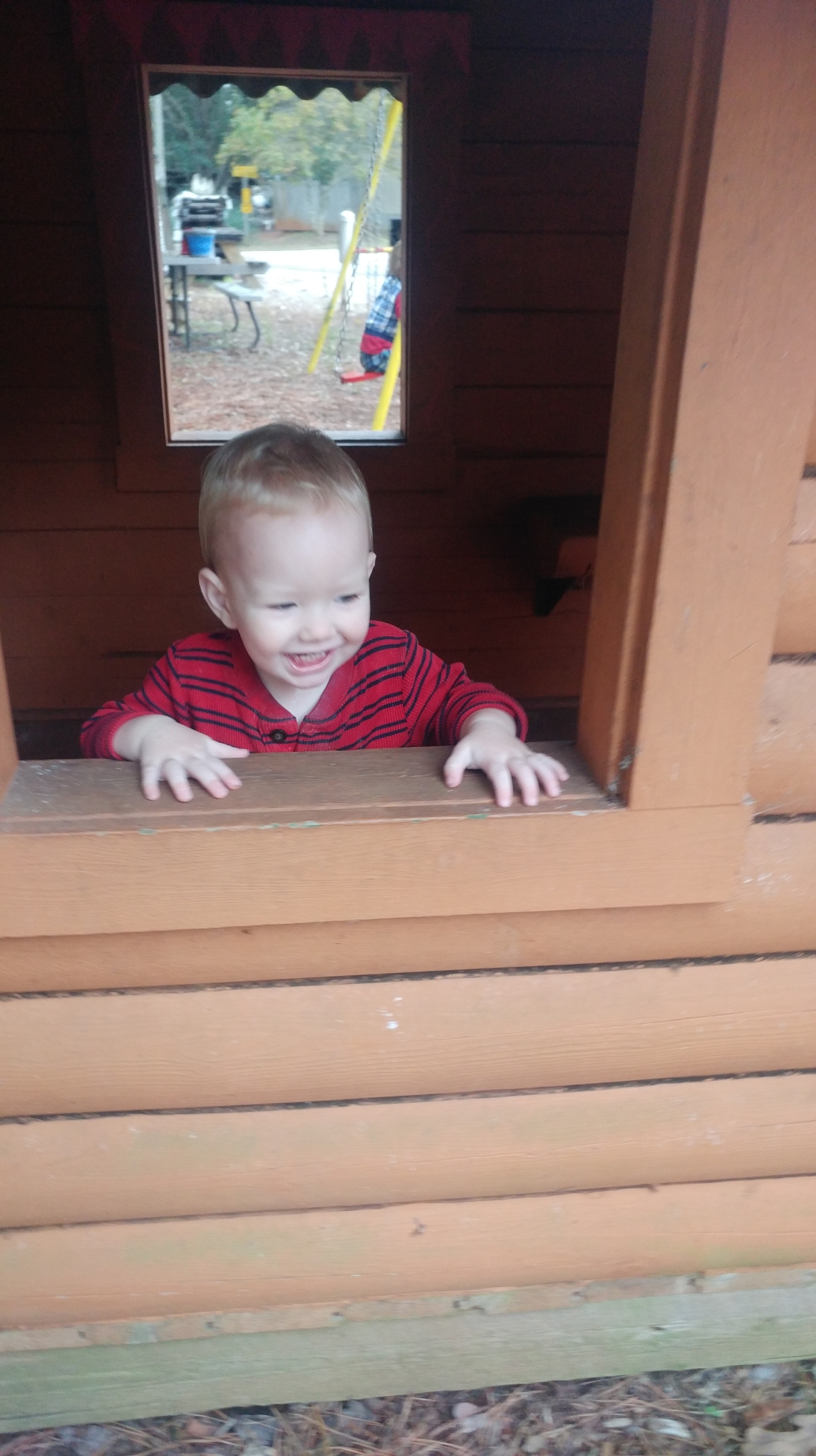 The next day brought us continual rain. The boys were hyper, so we went out. We had fun at the thrift store, where the boys found some pom poms and I found a $6 mystery box filled with lots of fun toys, including a lot of Legos. 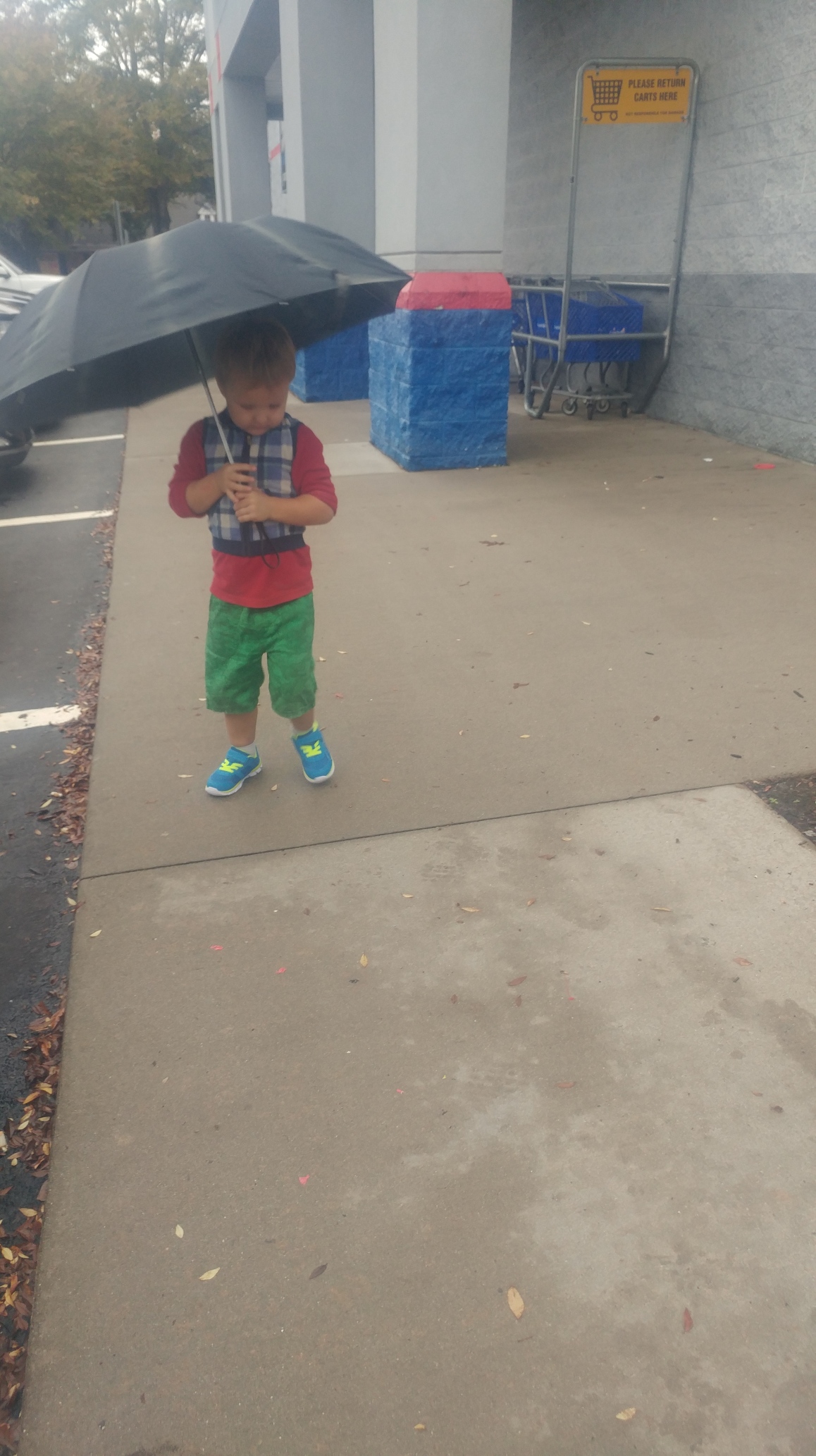 Then we had the bright idea of giving the boys cookies so we could grocery shop…ya that worked out well. We did get to witness an interesting site – women lining up for Thanksgiving table decorations and grabbing them as they were pulled from the box. I don’t think the decorations made it to the shelves. It was pretty funny to see these women go nuts over these things.

After a short sleep, the boys were up early, so we got an early start to Alabama. The drive was smooth, but stressful dealing with two, very energetic and demanding boys. I was exhausted the the end of the drive. Damon tried to take them to the playground to give me a break, but it only lasted a few minutes. 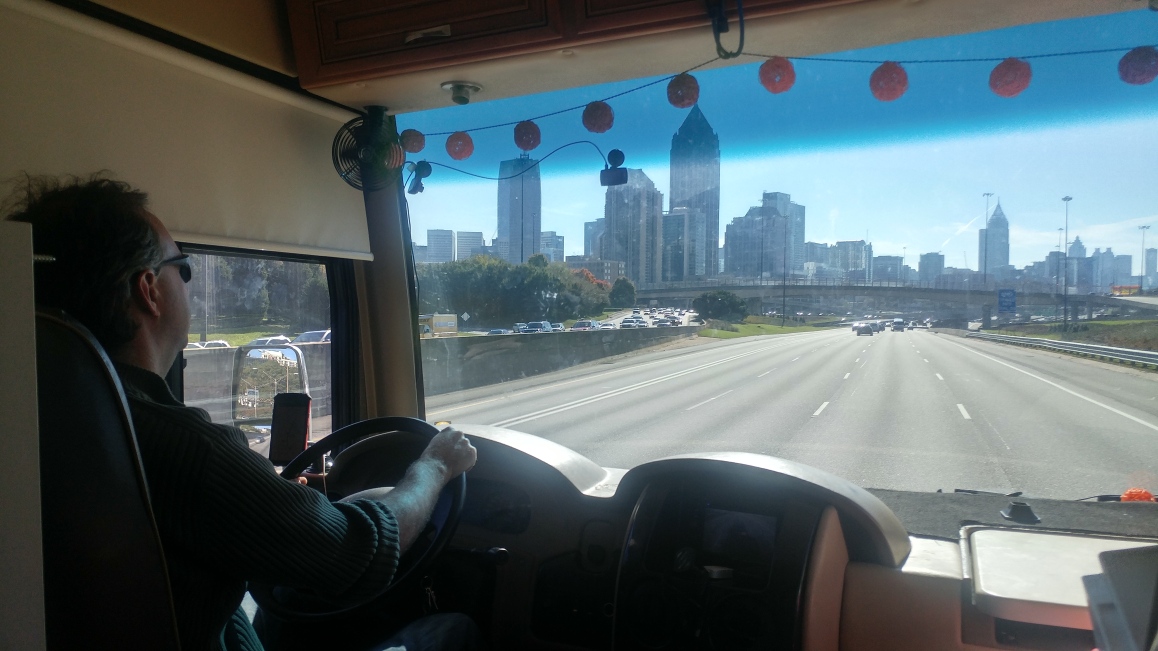 After so many days on the road, I think we’re all getting tired. Thank goodness we’re in New Orleans for a week.